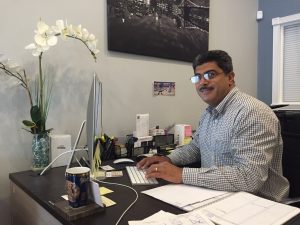 A lot of investors and home-buyers are, in fact, comparing Windsor Terrace to Park Slope, and other hot Brooklyn and Manhattan neighborhoods. Saber says that Windsor Terrace’s affordability and great location are turning heads.

Once considered a “rough jewel” of a neighborhood, Windsor Terrace’s secret is now out: it’s a hidden oasis, nestled between Greenwood Cemetery and Prospect Park, and is maybe one of the smallest communities in Brooklyn.

Saber was there – as a homeowner – since the gritty days (he remembers beer drinkers and dopers in the park across the street). These days, he says that same property – which he still owns – appreciates nicely year after year.

Another example of Windsor Terrace’s affordability: a three-bedroom rental will fetch $4500-$6,000/month in Park Slope. In Windsor Terrace, you’ll find the same size and the same amenities for around $3,000/month. And you’re still close to everything: one stop away from Park Slope by train, or five minutes by car.

Saber adds that, sure, everybody wants to be in Park Slope because of the restaurants, shops and bars. What many don’t understand: living there (as opposed to it being a nice place to visit) comes with a heavy premium.

Windsor Terrace’s biggest value: a safe community to raise your family, with a good school district, and plenty of parking. Most of the homes even have driveways!

With the current rush, Windsor Terrace demand currently exceeds supply. Saber is showing properties to interested parties from places as close by as Park Slope, and to buyers and renters as far away as Manhattan, Mill Basin, and Sheepshead Bay. He says that a house gets listed in Windsor Terrace, and he’ll get 50-100 calls immediately (and not just from interested buyers, but from competing brokers too).

The housing stock consists of multifamily buildings and lots of frame homes. It’s a neighborhood where houses were passed down from generation to generation. By the time Saber bought his first Windsor Terrace property, its owners were probably second or third generation. Homeowners like that often are astounded at the true current value of their houses, because, the last they heard, Grandpa bought it for $5,000 back in 1930.

That the housing stock is primarily residential (not commercial) was done by design. However, on the commercial side, the neighborhood is attracting Triple A tenants like Walgreen’s. Commercial space, especially storefronts, is limited in Windsor Terrace; Saber says that it’s ultimately a mom-and-pop-store vibe – many locals open businesses there and neighbors prefer the smaller, more specialized stores. All commercial stores benefit from this captive audience.

The housing stock may be a bit older, but there is plenty of home improvement happening. This usually starts around April and winds down around September, while the weather is good and people are house shopping. The biggest value-adds in Windsor Terrace: upgraded kitchens and bathrooms, as well as roofs, sidewalks and brick pointing (Saber knows many dependable, reputable contractors – just ask!).

Find out more about how Saber can help you. Click here.